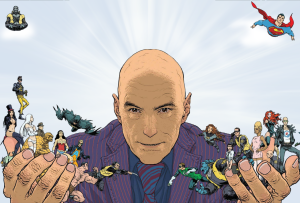 Having listened to three different podcast interviews with Grant Morrison (Fatman on Batman and The Nerdist) and one with Brian Michael Bendis (The Nerdist), I find myself on a bit of a comics binge, thanks solely in part to libraries.

I burrowed through the graphic novel stacks at my school’s library, procuring copies of Planet Hulk, Kevin Smith’s Green Arrow, Civil War: Wolverine, and The Runaways. I realized after the fact that I had already read The Runaways,and I will not be rereading it. I also managed to pick up Vol.4 of Brian K. Vaughan’s Saga from the town’s library.

Saga was great, but went way too fast. Always leaving me wanting more. I didn’t care for The Green Hornet. As much as I like Kevin Smith’s writing, this one fell flat for me. The Wolverine book is what you might expect in a Wolverine book. Cantankerous Canadian bastard doing a fair amount of the ultra violence. Almost done with it and then I’ll move on to Planet Hulk. I’ve seen the animated adaptation of this on Netflix, and I’m interested to see what was left on the cutting room floor.

Now, I’m waiting on a number of books to come in through the library system: Guardians of the Galaxy, Y: The Last Man on Earth. Would appreciate any suggestions any of you might have, if there are any of you…

First batch of pasties (PAS-tees) in a long while for dinner last night. Yellow potatoes, carrots, and onions seasoned with salt, pepper, garlic, and thyme. Skipped the rutabaga, which may be considered sacrilege to da Yoopers. #purdyfamilydinnerclub #midwestcuisine #yoopers #pastys
Merry Christmas from a coupla Purdy fellas.
Monday evening tabletop rpgs with Erp n’ Alp. #purdyfamilyrpgs #tabletopgamingwitherpandalp #d20
When you don’t have an extension ladder, you hang your lights inside with command hooks. #interiorillumination #purdyfamilychristmas2019
Philip. #purdyfamilychristmas2019 #elfonashelf